“One of the best farmers I know” Arnold Mack, Mack Farms–Lake Wales, FL

“If we don’t plant them, we can pack them” Karl Szawlowski, Swaz Potato Farms- Hatfield, MA

"The Corey's grow their potatoes from greenhouse to field, have great rotation, up to date humidity controlled storages, and solid family expertise that care. The end result for us is firm, disease free, and strong vigour seed that gives us a strong healthy plant stand. To get a big crop it starts with healthy seed and that is why we buy from Corey Farms!" Ryan Albright, Covered Bridge Potato Chips-Hartland, NB

“Corey Farms has been a blessing to me and all customers that we service. I could write extensively about why I choose to do business with them but in a nutshell…..they are the best!!” -Robert Sirois, MFX-Presque Isle, ME

“If I keep planting your seed, I’ll have to keep building more storages!”- Matt Griffeth, Griffeth Farms- Limestone, ME

“In order to compete in today’s market, you have to start with the best and Nu-Seed Corp./Corey Farms has it!” Wayne Heath –Townsend, VA

“Your seed was excellent and the potatoes produced second to none!”  Aaron Ayer, Ayer Potato -Caribou, ME

“Seed Pro's consistently high quality, disease-free seed of a uniform size profile has been a key to improving our crop yields and finished product quality in our chip business.”  Cranes Bros- Exeter, ME

“I have been extremely happy with the performance of the seed that I have purchased from Corey Farms. I have great confidence that I am getting high quality, disease and virus free seed due to their closed seed production system.” Michael Brooks, Dusty Lane Farms –Elmer, NJ

"My family has been growing potatoes in Aroostook County for 5 generations. We have been buying our table stock seed from Daniel Corey for 20+ years and his seed has consistently out-performed all other seed lots.” Bell Bros. –Mars Hill, ME

“To the best of my knowledge we had no issues with your Lehigh or Envol seed last year. Stand and yield were both good and no signs of Dickeya. Any other questions please feel free to contact me.”Rich Miller, Sterman Masser, Inc.- Sacramento, PA 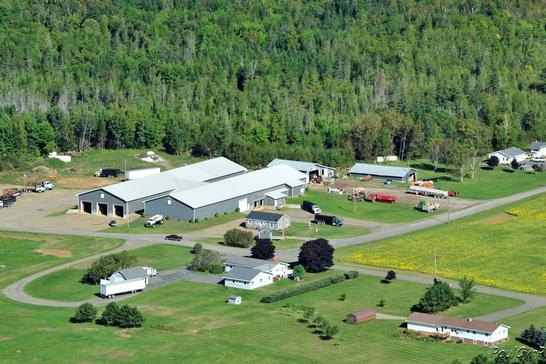 1986- Daniel J. Corey plants his first crop of 52 acres. Crop was table and processing for McCain and Interstate.

1992-The central warehouse in Monticello was built.

1996-Nu-Seed Corp. is established for freight and construction.

2007-Daniel J. Corey became the first exporter of seed potatoes when he exported to Brazil.

2012-Sara Corey joins the farm as Director of Agronomy and Variety Development and plants her first crop of potatoes and oats. She returns with a Bachelor of Science in Chemistry.

2013-Seed Pro Inc. purchases the former Monsanto Facility, equipped with a state of the art laboratory and 3 greenhouses.

2015- Nu-Seed Corp. breaks into the microbrewing market with its wheat.

2015- Ben Corey is featured in the Farm Credit East 2015 Calendar for the month of July.

2017- Ben Corey returns to the farm full-time after graduating from the University of Maine with a Bachelors in Ag. Economics.

2018- Frederick's Transport, LLC. is started in Monticello, Maine for the brokerage needs of the East Coast.

2019- Daniel J. Corey retires from Farm Credit East board of directors after nearly 2 decades on the board.

2019-  DeLee Produce, LLC. is formed in Elkton, Florida with 400 acres of tablestock potatoes and 250 acres of Broccoli.

2020-  Sara Corey Parker graduates with her Master's in Business Administration from Husson University.

2020- Benjamin Corey installs his first greenhouse to expand on his farm stand on the Bangor Road in Houlton offering a variety of crops.